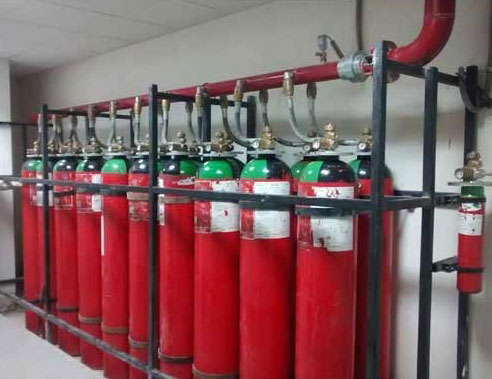 INERGEN is a mixture of nitrogen, argon and carbon dioxide, and has been specially developed to provide fire protection for sensitive electrical and electronic instruments and equipment.

INERGEN extinguishes fire by reducing the oxygen level in a room to below 15% (the point at which most combustibles will no longer burn). Simultaneously the patented carbon dioxide in INERGEN protects anyone that may be trapped in the fire area from the effects of the lowered oxygen levels. Further, it does not produce a heavy fog upon discharge so escape routes remain completely visible.

These Gas suppression systems are extensively used in electronic data protection and electrical system switch environments. Systems comprise of electrical detection linked to a bank of cylinders where the gas is stored ready for discharge into the fire area. Inergen Clean Agent Fire Suppression Systems are completely environmentally friendly and safe to use in enclosed areas where people may be present. Inergen is zero ozone depleting, zero global warming, and has a zero atmospheric lifetime. It is an environmentally green three dimensional fire suppression agent replacing Halon 1301.

The fire suppression is performed by lowering the oxygen content of the protected area to a point sufficient to sustain human life but insufficient to support combustion. Typical applications for Inergen are computer centers, tape storage centers, telephone exchanges, remote cellular sites, process control rooms, medical diagnostic rooms and MRI scanners and others which require a non-water based extinguishing agent that:

The Inergen discharges through specially designed nozzles. To minimize turbulence in the protected area Inergen nozzles are fitted with discharge deflectors. It is stored in cylinders near the facility under protection.